go to the next period

History links the city of Genoa to the Spinola family since the 10th century. What is certain is that Guido Spinola, on return from the Crusades in the Holy Land, became Consul several times dating back to 1102.

Genoa, strong due to its mercantile dimension, had in fact eliminated feudalism,creating a new formula for the good governance of the city. By ecclesiastical desire the Compagna Communiswas created, led by “Consuls” (chosen among noble families and among representatives of the people) and by a Consilium (council); thus, in fact, the Republic was born.

Genoa grew using its sea, developing merchant trades and acquiring possessions in the Mediterranean and in the near East. Everyone wanted to do business with the city and the rivalry with Pisa and Venice began. . The present medieval part of the historical centre was developed thanks to the powerful Doria and Spinola families (Ghibelline), Fieschi and Grimaldi (Guelfe) and was enriched with churches and palaces; Oberto Spinola founded the Church of San Luca in 1188. This model of power management created tensions and the contrasts between Guelphs and Ghibellines began The Ghibelline prevalence began in 1270, when Oberto Doria and Oberto Spinola joined forces and created a twenty-year diarchy that favoured the growth of the Marine Republic.

In 1306 Argentina Spinola, the daughter of Opizzino, married the son of the Byzantine Emperor; Her father, in 1309, became Captain Perpetual and after alternate events he returned to Genoa alongside Henry VII, Emperor of the Holy Roman Empire, from whom he obtained the government of the Republic for 20 years and the Imperial recognition of his fiefs beyond the Apennines with the privilege of coining money.

Genoa experienced a period of dizzying economic and urban growth Once again, in order to resolve the internal differences in the city, the old institutions were abandoned; a more authoritative figure was created, the Doge: Simone Boccanegra was appointed in 1339. 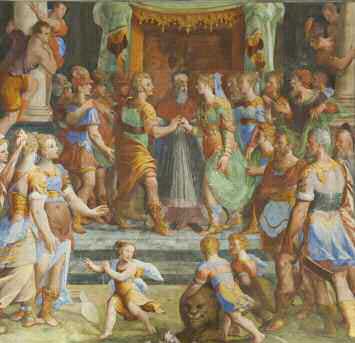 During the XV century Genoa was subjected three times to the French rule and twice to the Milanese rule of the Visconti and Sforza, but in1406 it founded the Banco di San Giorgio, the first credit institution in the world, confirming its economic power.

During French rule, Francesco Spinola led Gaeta’s siege against the Aragonese and, in 1442, the Battle of Ponza; his equestrian statue, part of the funeral monument, is now exhibited in the atrium of the Spinola palace of Pellicceria.

Between 1445 and 1459, Palazzo Spinola dei Marmi was built, with its facade completely covered in black and white striped marble, a privilege reserved only to the four most important noble families of the city (Doria, Spinola, Fieschi and Grimaldi). The Palace, as one of the epigraphs mentions in the facade, was built by the will of“Jacobi, son of Carroccio and great-grandson of Gerardo, lord of Lucca and Tortona…” In 1453 the fall of Constantinople by the Ottoman Empire deprived Genoa of many rich colonies in the East; the Republic looked to the West and anticipated Andrea Doria’s pro-Spanish views. In 1492 Christopher Colombo, funded by Ferdinand II of Agarona, discovered the “New World”: As Quevedo wrote“Gold was born in America… came to die in Spain and is buried in Genoa”. Since the beginning of the 16th century Genoa has been involved in the conflict between France and Spain, suffering the various events of the dispute.

Among many legends it is narrated that in 1502, Louis XII arrived in Genoa in search of alliances and fell in love with Tommasina Spinola who later died of a broken heart at the false news of the king’s death. On his return to Genoa as a conqueror, Louis visits the house of his beloved and according to legend he says these words “it could have been a perfect love”; from that day onwards, the place becomes the Piazza del Amor perfetto (The square of “the perfect love”) The ‘500’s mark the reconstruction of the Genoese dominion. ln 1525Spain defeated France, and Genoa together with Andrea Doria could claim to have cooperated in the victory with weapons and money. In the year1528,it was thus possible to transform the denomination “commune” into an oligarchic “Republic” in whose government only noble families could participate,

The city became rich and opulent and in the middle of the century, the construction of Strada Nuova, the current Via Garibaldi began. Luca Spinola, Doge in 1551, bought the “tuguri” of La Maddalena, Fontane Marose and San Francesco di Castelletto for 5.000 lire of the time, These lands were partly used to build the four “Spinola” palaces that we still admire today, a part of which were then sold to other wealthy noble families. It was the century of geographical discoveries; in 1543 the Portuguese arrived in Japan and after those first merchants, the first missionaries followed. Father Carlo Spinola, who entered the Society of Jesus in 1584, embarked for the East Indies, reaching Macao where he probably designed the project of the facade of the church of Sào Paolo. In1602 he arrived in Japan, where he suffered martyrdom twenty years later.

go to the next period