«To God excellent Massimo Here lies Giovanni Battista Spinola who, distinguished for the greatness of his virtue above even his same ancient nobility of lineage, was appointed, Duke of San Pietro in Salento by Filippo King of Spain. The homeland first proposed a fleet of triremes to him, then appointed him as ambassador to the imperial court. At the first warning of a terrible war, he was sent as ambassador to Philip IV in Spain, well known to him, to make use of his prudence and financial resources. Premature death took the supreme glory from him, but he shines all the greater from reflected virtue, in the Year of Health 1634. Dedicated by his wife Maria Spinola to her beloved spouse and his son Giovanni Maria to his excellent father.».

Translation of the memorial plaque in Italian in memory of the burial in the Gentilizia Chapel at the Abbey of San Nicolò del Boschetto.

Son of Gio Maria Spinola and Pellina Lercari (daughter of Giovanni Battista Lercari, 64°Doge of the Republic of Genoa) was born in Genoa in 1575 and died in Madrid in 1625.

Recipient of a fideicommissum of his grandfather Giovanni Battista Lercari,Giovanni Battista Spinola inherited, at the end of his thirtieth year of age, a part of the remarkable patrimony which the fideicommissum guaranteed to him and to his legitimate and natural male offspring, provided that Giovanni Battista concluded a marriage with the consent of his parents; that those called to the succession returned to Genoa at the end of their fifty-fifth year of age; that they provided for, under penalty of forfeiture from possession, the maintenance of the houses of Genoa and of Sampierdarena. His daughter, Pellina, was declared heir to all the remaining patrimony of Giovanni Battista Lercari. Fideicommissum and executors of the testamentary, as well as tutors and curators of the grandchildren, were appointed and they were: the wife of the testator, Maria Imperiale, the daughter Pellina, Gio. Giacomo Imperiale Son of Vincenzo, the son-in-law Gio. Maria Spinola, Giulio Spinola son of Angelo Giovanni, Giacomo Spinola, son of Federico and Enrico Salvago son of Accellino. His wife, Maria Imperiale, died in January 1593, leaving his daughter Pellina heir.

On January 1, 1596, Giovanni Battista Spinola married Maria Spinola, daughter of the late Filippo Spinola, son of Ambrogio, marquis of Sesto and Venafro, of the same family branch “of San Luca”, and of Polissena Grimaldi, daughter of Nicolò, Prince of Salerno. The union, between Giovanni Battista and Maria, further consolidated the parental network of the spouse in the pro-Spanish, feudal aristocracy, linking his descendants to that of the Marquises of Los Balbases. The wedding of Giovanni Battista and Maria was celebrated by the head of San Luca in the house of Marquis Ambrogio and the spouses received the wedding blessing on November 24 in the villa of Cornigliano.

On October 26, 1615, shortly before leaving Genoa with his wife, Giovanni Battista issued a general authorization to his son-in-law, Luca Spinola, who would represent his father-in-law in the city for the next two years. In 1616 the Spinola and their retinue made a triumphal entry into Galatina. During their stay, Gio. Pietro was born and then baptized on July 5, 1616. On October 15, 1617, Giovanni Battista was in Francavilla, from where he extended the General Proxy to his son-in-law. The Spinola returned to Genoa in June 1618, stopping off in Rome and Naples. Back in Genoa, Giovanni Battista resumed the administration of his large financial revenues, with its growing capital.
On April 6, 1621, Giovanni Battista obtained the title of Duke of San Pietro in Galatina from the Spanish Crown
In the same year, he made a new important investment in feudal property with the purchase of the marquisate of Torrione of Monferrato, land under the lordship of the Gonzaga dukes of Mantua.

On 11 October 1623, Giovanni Battista and his brother Gio. Luca, also in the name of Gio. Agostino, came into the inheritance of their mother, Pellina Lercari. On the following 12 of November, in the process of leaving Genoa, Giovanni Battista dictated his definitive testament. The Duke of San Pietro in Galatina, Kingdom of Naples, a Genoese gentleman, dedicated as usual the first provisions to his burial, planned for at the Boschetto even in the event of the testator dying far from Genoa. The funeral obsequies were entrusted to the will of Maria Spinola, his beloved wife. To his eldest son, Gio. Maria or to whoever succeeded in the fideicommissum Lercari, he assigned the feuds of San Pietro, Borgagne and Pasulo, in addition to Soleto which he had already given to Gio, and all the property and income he had purchased there. Moreover he destined the Marquisate of the Torrione and the Office of the Secretariat in Lecce, already registered to his son, to Gio Maria and to the successors in the fideicommissum Lercari Gio. Carlo Spinola, recommended a life in accordance with Christian teachings to his children, excluding from the succession and distribution those who had been stained with crimes of “Lesa Maestà Divina et Humana” (Lesa Maestà is a term meaning “to do wrong to majesty” an offence against a reigning sovereign or state) and in any other case liable to incur the confiscation of property. The female daughters, Maria Camilla and Violante, were given a dowry of 40.000 silver crowns each, provided that they were married with the consent of the fidecommissioners.

Giovanni Battista returned to Genoa in June 1624, when he ratified the division. The villa Avita of Cornigliano remained undivided and was sold in 1634 by Gio. Luca and his nephew, former friar. Gio Maria Spinola to their cousin Lelia Di Negro Gropallo .

In 1624, Giovanni Battista was preparing to make one of the most significant investments of his life. The purchase of a new residence worthy of a noble family that would become the emblem of his family in the city. Probably with the intercession of his brother-in-law Ambrogio Spinola, Giovanni Battista bought the Palazzo of Antonio Doria, hence the name of the Palazzo DORIA SPINOLA.
In memory of the purchase, a Spinola coat of arms was frescoed on the main façade, and this inscription placed “above the arch of the main door internally” recites:

In 1625, Giovanni Battista was appointed extraordinary ambassador to the Court of the King of Spain. The diplomatic mission was aimed at confirming the Republic’s relations with the Court of Madrid, overshadowed by the consequences of the conspiracy ordered in Genoa by Claudio De Marini. In the following months, in preparation for his departure for the important diplomatic mission, Giovanni Battista, who appears to have continued to reside in the Lercari palace, carried out various acts to guarantee the good administration of the patrimony. Ambassador Spinola left Savona in mid-October on the “royal” galley, which came with others from Sicily, and reached Barcelona, from where on October 20 he reported to the government. In the following days he informed Ambassador Serra in Madrid of his arrival, scheduled between 10 and 12 November. fra il 10 e il 12 novembre. But he arrived in Madrid only on the evening of November 25, after a long and tiring journey. The day after his arrival, Giovanni Battista made it in time to receive the visit of Nunzio Apostolico, while he had not been able to meet the ambassadors of Alemagna, Florence, Lucca, Mantua and Modena due to the rapid deterioration of his health conditions. He died in Madrid in early December 1625.
His remains were transferred to Genoa, in the noble chapel of San Nicolò del Boschetto by the will of his wife and his eldest son, who made a commemorative plaque.

Photo of the coat of arms of the Ducal Palace of Galatina (Lecce) https://www.galatina.info/luoghi/palazzo-ducale-o-castello/

Giovanni Battista Spinola was the son of Gio Maria Spinola (?-1601) and of Pellina Lercari(?-1623) who was the daughter of Giovanni Battista Lercari(1507-1592), 64° Doge of the Republic of Genoa and of Maria Imperiale.
Siblings: Maddalena Spinola married in 1584 to Giulio Spinola son of Angelo Giovanni; Gio Domenico Spinola, Cardinal of Santa Cecilia and Bishop of Mazara; Gio Luca Spinola (1583-1670) married to Battina Lomellini (?-1668) in 1608 , daughter of Giacomo, son of Nicolò; Gio Agostino Spinola; Violante Spinola (1586-1616) married in 1603 to Maximilian Spinola of the Counts of Tassarolo. 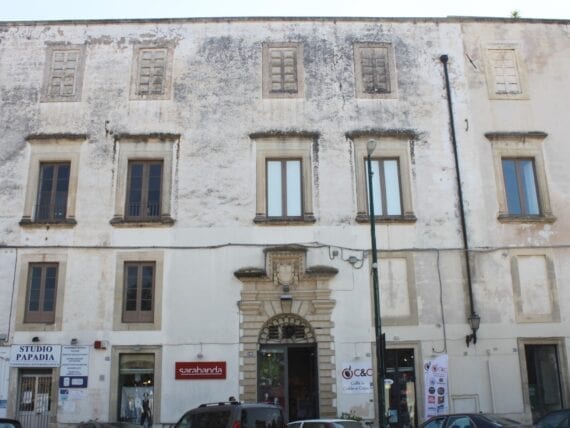 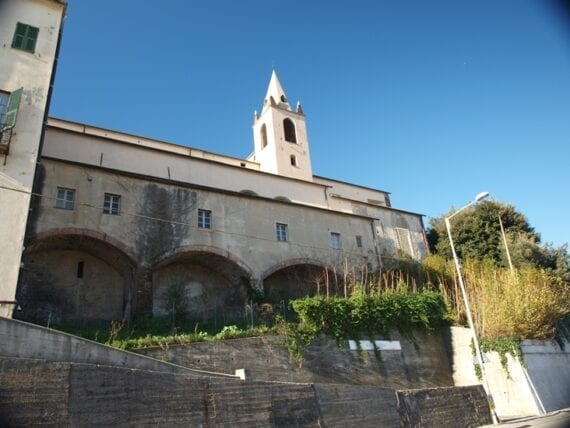 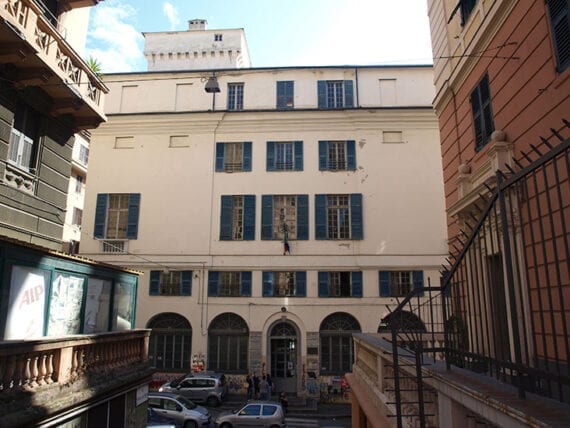 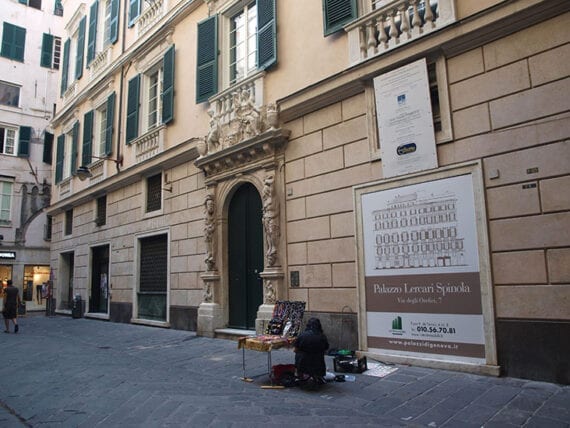 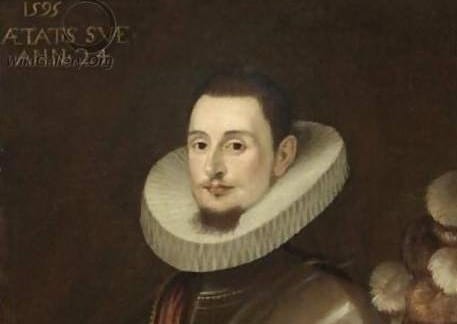 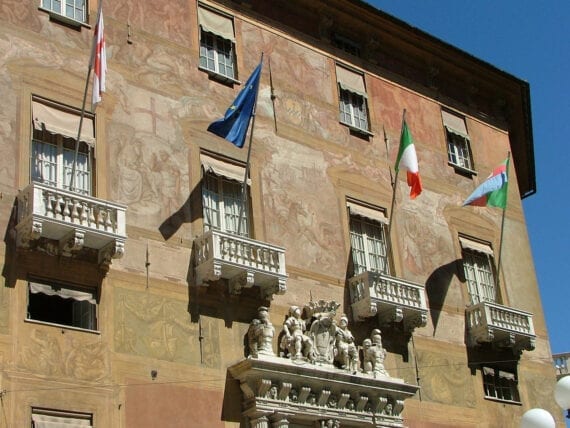